Hemp with CBD for pets

Hemp and pets
Hemp products with CBD for pets, there are plenty of pet owners who swear by them. Not surprisingly, according to research, these products are becoming increasingly popular among pet owners.

What is CBD?
Numerous substances called cannabinoids occur naturally in the hemp plant. One of these cannabinoids is cannabidiol, better known as CBD. Unlike another well-known cannabinoid, THC, CBD has no psychoactive properties, is not addictive and does not cause hallucinations. In addition, it is good to know that hemp products for pets, containing the naturally present CBD, are produced from European permitted hemp varieties specially selected for their low THC content (<0.2%.

What CBD does to the body
Both humans and animals have a so-called endocannabinoid system (ECS). This biological system can be seen as a control system of the body and is universally constructed in mammals. However, small differences can exist between species, but also within species, which means that not all animals react in exactly the same way.

The ECS consists of a combination of receptors and substances that influence these receptors and can activate or deactivate them. The receptors can be divided into 2 types, CB1 and CB2, and are mainly concentrated in the brain and nervous system (type CB1) and in the cells of the immune system and organs (type CB2), see also figure below. The substances that can activate the receptors can be the body's own substances, the so-called endocannabinoids, but research has shown that certain substances from plants, the cannabinoids, such as CBD from the hemp plant, can also influence these receptors. 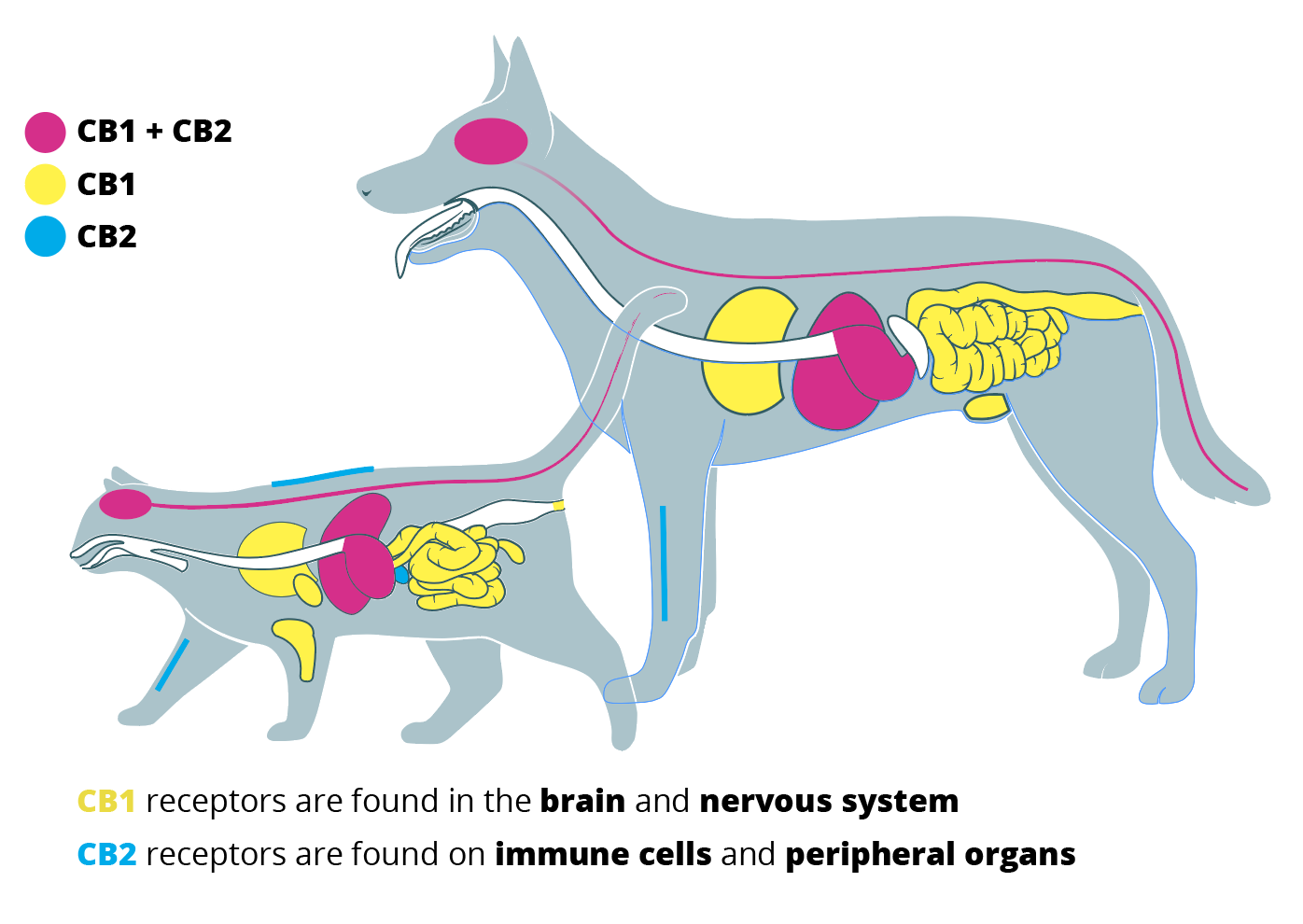 Research has shown that the ECS affects stress response, immune system, appetite, body temperature, energy metabolism, brain function, anxiety, reproduction, nervous system and analgesia, among others. The main function of the ECS is to keep the body in balance. If the body's own endocannabinoids are deficient, the balance of the ECS can be disturbed. To bring the ECS back into balance, it can be supported by providing cannabinoids from outside. Research has shown that hemp products containing CBD are generally safe to use by humans and animals.

Figures on CBD support
Further scientific research is needed to clarify the exact mechanism behind the interactions of cannabinoids like CBD from the hemp plant with the body. Consequently, more and more research is being conducted into the effects of cannabidiol (CBD). A recent US study by the Brightfield Group into experiences of users of it found that 58% of pet owners they surveyed indicated that when they provided a hemp product containing CBD to their pet, it seemed to be relaxing for their pet.

The figure above shows the most commonly indicated findings from pet owners. Besides a relaxing influence, pet owners further indicate that hemp products with CBD have a beneficial effect on their pet's sleep function and that it supports their pet's mobility.

Furthermore, the Brightfield Group survey shows that as many as 84% of US pet owners indicate that hemp products with CBD are a good support for their dogs and cats, according to the figure below.

Thank you for registering for our newsletter.

Products not added to shoppingcart
Not available
The products below have not been added to the shopping cart because they are no longer available.
No or not the correct permit
For the product (s) below, you as a dealer need a permit to be able to order these products.